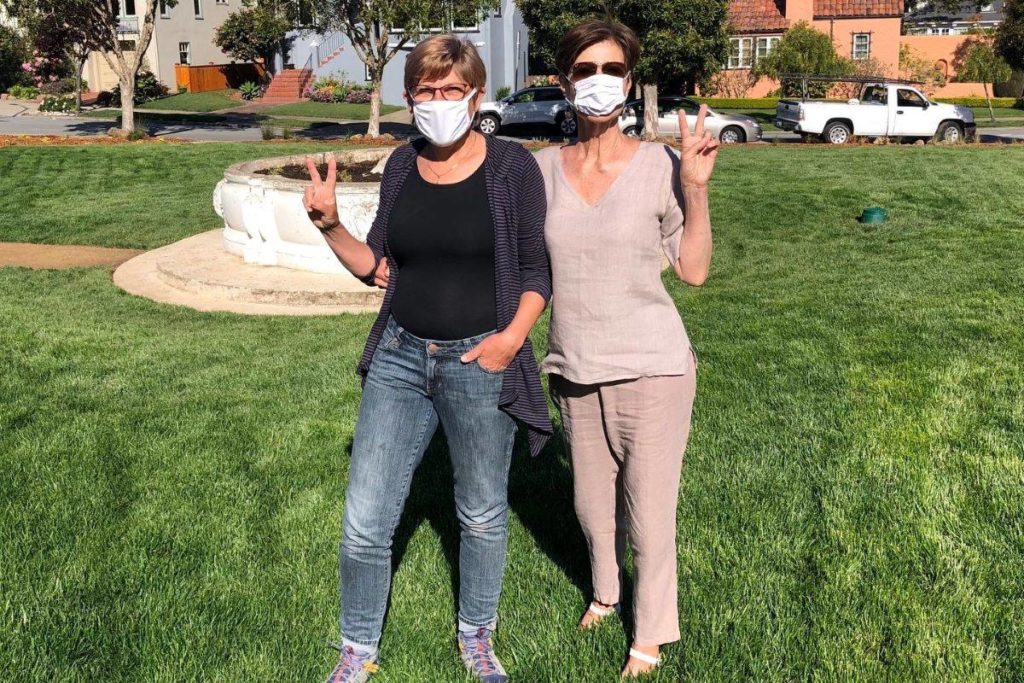 There’s a reason Christopher Guest mockumentaries and fictional TV shows like “Schitt’s Creek” and “Parks and Recreation” are so popular. They reveal the humor and pathos in the daily travails of a town’s residents trying to make their patch of life better.

And the little guy gets to win, or at least find purpose after enduring the indignity of living in a world where you can’t beat City Hall.

If neighborhood politics in San Francisco were a Netflix show, 77-year-old Carol Dimmick would be a central character. She raised two sons, became an investigative journalist in mid-life, and has spent her retirement figuring out how to push the levers of the byzantine Department of Public Works to rehabilitate dilapidated neighborhood open space.

“Carol is tough. If people aren’t giving answers, she’ll get them. The lady gets things done,” next-door neighbor Kate King said when I first wrote about Dimmick, who recruited King to help clean up the long neglected West Portal walkway. “I can make a website. But I don’t have her thick skin and tenacity.”

Dimmick’s vision for better city life has four key parts. First, get residents involved in civic projects so they feel empowered to create stronger communities. Second, get city officials to acknowledge what residents need and provide the necessary support to improve neighborhoods. Third, get everyone to collaborate. Finally, good communication all around.

Now she is sharing her hard-earned insights and bag of tricks with younger neighbors because she wants to scale the movement beyond herself.

Dimmick came knocking when she heard that Roberta Bechtel wanted to fix Triangle Park, an unusable eyesore in the Forest Hill Extension neighborhood that had waist-high weeds and was riddled with gopher holes.

“She showed up at my front door,” Bechtel said. “I had to figure out, ‘Who is this person and do I let her in?’ Then I watched her work and thought, ‘Wow I need her.’ I learned from Carol how things really work at City Hall.”

Writers of a Carol Dimmick-themed Netflix show would have lots of interesting material.

Imagine the opening scene. We’d see a close-up of city officials when they realized that Dimmick’s insistence on installing new flower beds on the Dorchester median led to the discovery that the road itself was unstable. They were suddenly on the very expensive hook for drilling 30-foot concrete pilings under the median to shore up the street.

The second scene would be a close-up of Dimmick’s face when she discovered her newly installed “No dog poop” signs on the West Portal walkway had been desecrated by an irate neighbor.

Viewers would learn that Dimmick attracted enemies and suffered losses, too. Yet she remained undaunted, even in the Triangle Park scene where — in an homage to “Caddyshack” — the gophers were winning.

Triangle Park had been orphaned by The City for so long, a revival seemed impossible.

“It felt like we were always getting knocked down and we didn’t know where to turn for help,” Bechtel said. “Then the coronavirus pandemic hit and everyone at City Hall disappeared.”

But Dimmick and Bechtel rallied. The pandemic made their project more relevant than ever. With nearly 900,000 San Franciscans sheltering at home, every bit of open space was a valuable respite to safely walk dogs, exercise, play with kids, or just sit in fresh air outside.

Triangle Park was one of many neglected mini-parks rendered unusable with weeds, trash and hazardous conditions. They had become wasted space The City could no longer ignore.

Despite facing large deficits, City Hall could still afford to cut weeds. Maintaining current pen space is much cheaper and easier than creating new spaces. It also saves money when the alternative is the public health costs of not providing enough accessible areas for social distancing in a pandemic.

I wrote about the saga of Triangle Park last summer. By fall, The City had funded the necessary renovations with the help of former Supervisor Norman Yee.

“We encouraged the neighbors to apply for my office’s participatory budgeting program and was excited it won funding in 2018,” Yee said. “When we learned of the delays and complications with the Department of Public Works, I advocated for additional funding in my last year in office to further advance this project.”

Today, Triangle Park is unrecognizable with parents pushing baby strollers on a perfectly level path and families having picnics on thick grass that used to be a rocky wasteland.

Before and after: Roberta Bechtel is pictured in Triangle Park. (Courtesy photo)

Bechtel organized neighbors to do regular weeding of new drought resistant plants in partnership with The City. They are also raising funds to paint the historic fountain and install benches decorated with mosaic tiles.

“When community groups are able to commit to maintaining a site and demonstrate their reliability, then we’re always eager to collaborate on projects,” said Carla Short, a superintendent with the Department of Public Works.

While Bechtel is grateful for all the assistance she eventually received from Short, she wishes there was a simple roadmap anyone could use to work with The City on a project.

“It’s a dark maze,” Bechtel said. “Residents shouldn’t have to go through all the hurdles and guesswork to get something fixed. Not every neighborhood has the connections and know-how that I was fortunate to have with Carol pushing things along. I’m willing to teach and help others, but The City should create an easier path for approving projects.”

Say ‘nonsense!’ when they say ‘no’

Season two of our Netflix show would start with Dimmick cutting through the dense brush under the Kensington pedestrian bridge and pulling out debris ranging from alcohol bottles, discarded suitcases and rusted tools. Maybe on her birthday, so viewers are reminded that she’s 77.

Carol Dimmick got to work under the Kensington pedestrian bridge. (Courtesy photo)

Then we’d see city officials react when she insisted the bridge’s newly cleaned pillars — previously covered in thick ivy — should become pillars of public art with a design that matches the bridge’s mid-century modern architecture.

When Dimmick was told by the city attorney’s office that something like this hadn’t been done before, that it could require an easement and other fees her neighbors couldn’t afford, she had one word: “Nonsense!”

Dimmick made the case that the clean pillars would become magnets for graffiti and constant removal would drain limited city resources. She said studies show that public art is less often tagged by graffiti, so a design on the pillars makes fiscal sense. Plus, Dimmick had planned to pay for the design through private fundraising.

“We are saving the city a bunch of money,” she said. “The city has to recognize that projects like this are important because they save money, help unemployed artists, stabilize neighborhoods, and give residents a feeling of pride.”

Dimmick put her investigative journalism skills to use and found two cases in Japantown and Glen Park where the city had worked with neighbors on designs for bridges. She left no room for the city to say no.

“I appreciate Carol’s energy,” said Supervisor Myrna Melgar. “She is a doer who motivates other people to become doers. We need more people like Carol in the world.” Melgar said she wants to help Dimmick get the artwork on the bridge because it’s a good idea. Melgar also said it’s an opportunity to change a “ridiculous” part of the city code: paint on pedestrian bridges is currently defined as an encroachment.

“I’m confident we will be able to approve and get the artwork installed,” said public works superintendent Carla Short.

The episode would end with Dimmick showing city officials the artist renderings of hip mid-century designs that will bring joy to everyone who passes under or over the Kensington pedestrian bridge.

The finale of our Netflix show would start with Dimmick scraping moss off the steps leading to her bridge. We learn she is using her own tools because The City doesn’t have the proper moss-scraping equipment and would have to rent it in a drawn out process that wouldn’t be worth the effort.

“There are deeply entrenched issues that have to do with staff time, equipment, and processes that need to be corrected,” Dimmick said. “To have successful projects, The City must have the will to work with other agencies, to work collaboratively in house, and with people that live in the community.”

Dimmick and Bechtel say there are responsibilities for residents, too. They need to have realistic expectations, be willing to have patience with overworked city bureaucrats, and step up to do their share.

“It doesn’t work to just say “the city should fix it!” and complain when nothing happens,” Bechtel said. “The City will fix things when residents get organized and show they have the passion to work with the city to make their neighborhood better.”

Dimmick said the initial onus, however, should be on The City to make projects easier andmore attractive for residents to get involved.

“The City needs to do the reaching out versus residents begging for help and blindly trying to figure things out,” Dimmick said. “We need leadership at every level that has a collaborative mindset and has the capacity to pull the levers.”

After navigating five complicated neighborhood improvement projects, Dimmick said she learned a lot about what is broken and also what works at City Hall.

She only had good things to say about public works superintendent Carla Short, who shepherded the Triangle Park project during the pandemic.

“The bottom line is that the public works department is resilient,” Short said. “The success of the Triangle Park project demonstrates that.”

In the last scene, we see Dimmick standing in the new landscape under her bridge. She’s holding up a peace sign.

Carol Dimmick flashes a peace sign at the Kensington bridge after all the work has been done. (Courtesy photo)

For her, the payoff for all the hard work is not just a beautiful street median or a safe and clean pedestrian bridge. It’s the community that is created from doing the work.

“If you’ve never met your neighbors, these projects will give you the opportunity to meet them at a time when people are looking for community more than ever,” Dimmick said.

Residents are worn down by ongoing concerns about public safety and pandemic recovery. They’re weary of all the City Hall scandals and controversies from department heads to school board members. Many wonder if San Francisco’s best days are ahead.

“People have stopped believing in city government. There is a lot of distrust,” Dimmick said. “City leaders need to say ‘we recognize the distrust’ and then work to address it. Collaborative projects like Triangle Park and Kensington Bridge are an opportunity to rebuild that trust. They can make residents feel good about our city and give us reason participate. Seeing results will restore our faith.”

Joel Engardio is a neighborhood advocate who lives on San Francisco’s westside. His blog is engardio.com.

Bellevue is one of the best places to live for a SaaS...

The Location Guide, Filmmakers for Ukraine and EUFCN join forces for fundraiser...